From Hard Fork to $4K: A Bitcoin Cash Price History On July 22, 2017, Bitcoin Cash announced that it would fork from the Bitcoin blockchain just ten days later on August 1.

No one knew what this new virtual asset would be worth, or whether it would be worth anything. Bitcoin holders, their wallets, and online exchanges all rushed to figure out how they would deal with Bitcoin’s first hard fork.

Since then, the value of Bitcoin Cash has tripled its value, lost more than half, and rallied again, closing the year with a huge spike to $4,000.

Along the way, there’s been:

While it was initially perceived to be worthless, the huge movements in Bitcoin Cash’s price over the last 4 months can be matched only by Bitcoin.

With a remarkably durable price, a fervent community behind it, and the consensus to solve a real problem that exists with Bitcoin, Bitcoin Cash has traders both using it as a hedge against Bitcoin’s scaling troubles and as a coin to hold for the long term towards a world in which there are multiple crypto winners. 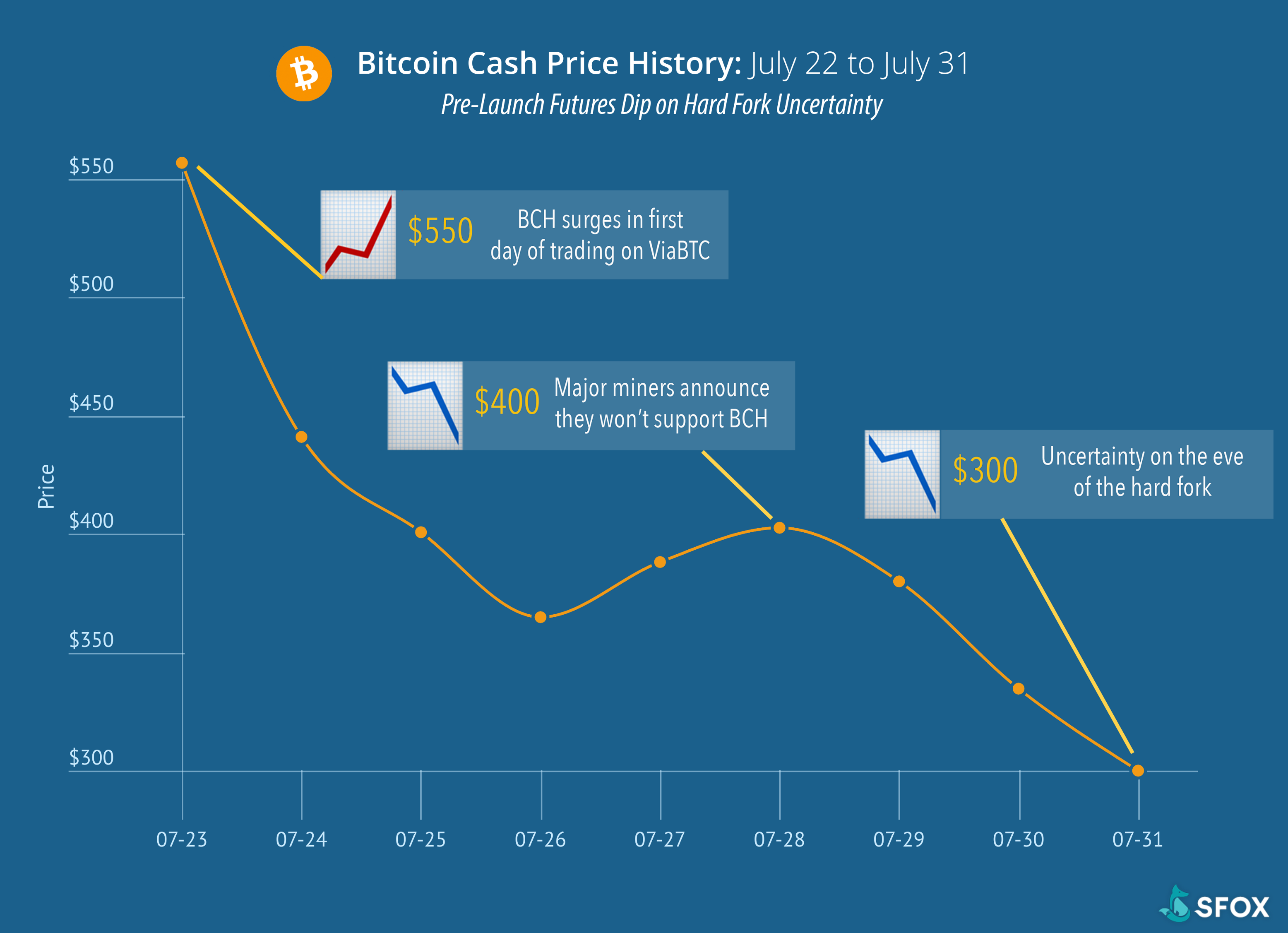 The opening price is somewhat unexpected and suggests high demand for BCC, which means it may attract considerable hash power as well as support from other exchanges and businesses.

📉 July 28, 2017
Most Major Exchanges Will Not Support Bitcoin Cash

None of the major trading platforms are leaning toward supporting this project right now. Companies including GDAX, Coinbase, ItBit, and BitMEX have all rejected Bitcoin Cash support.

Many digital currency players and Bitcoin enthusiasts believed that the new BCH token will be distributed as “free money” when the Bitcoin Cash hard fork was introduced . . .

Other industry players, meanwhile, think that Bitcoin Cash could somewhat reduce the existing value of Bitcoin. They believe that the Bitcoin case will be similar to the case of Ethereum and Ethereum Classic.

When Bitcoin Cash announced itself to the world on July 22, 2017 — with the post “Bitcoin Cash — Fork 1:1 of Bitcoin — Pro on-chain scaling — Cheaper fees” — it did have to be taken seriously:

Soon after launch, ViaBTC created a futures market for Bitcoin Cash on its exchange, with HitBTC following not long after. During this period from getting listed to the hard fork on August 1, the price generally declined roughly 50% from 0.2 BTC ($550) to 0.1 BTC ($290).

However, even at 0.1 BTC, the price of Bitcoin Cash added 10% of value to every Bitcoin holder’s portfolio. In addition, those who held their Bitcoin in an online wallet like Coinbase or on an exchange and didn’t have access to their private keys could not sell their Bitcoin Cash and wouldn’t be able to until those wallets and exchanges supported it.

That created a wait-and-see approach on the part of most with loads of uncertainty.

As of August 1st, exchanges and wallets around the world were split on the question of listing Bitcoin Cash, with many opting not to — at least for now. Most said that if it gained traction, they would consider listing it. A few, like Gemini, GDAX, and Bitstamp, said they would be unlikely to ever list the “altcoin.”

This uncertainty and doubt set the stage for massive price volatility that arrived in August. When the hard fork came, anyone holding Bitcoin was suddenly in possession of a new digital asset — and in the end, it was worth something. As many holders found themselves unable to sell, the price rose, exploiting this asymmetry. Though the price crashed shortly afterwards, an exuberance for forks followed and new altcoins began emerging to try and ride the same wave as BCH.

No one expected such a significant growth for Bitcoin Cash on its first two days . . . . One BCH token is worth US$756 at the time of writing . . . that same token was worth less than US$100 this morning after a lot of people sold off their coins for bottom prices.

Two of the country’s most prominent bitcoin exchanges, BTC China and Via BTC, said they will halt trading this month. BTC China has also stopped registering new users, it said in a statement posted on social media.

From August 1 to October 26, Bitcoin Cash peaked at roughly 0.22 BTC ($900) and dipped to 0.6 BTC ($200), flattening out around 0.05 BTC ($320). As wallets and exchanges began crediting accounts with Bitcoin Cash and allowing them to be sold, prices dropped amid fear of a massive selloff. At the same time, miner support and increased liquidity via that exchange deposit and trading support allowed Bitcoin Cash to bounce back.

In this short period of time, many in the bitcoin community went from anxiety about value extraction to exuberance over “free money” from airdropped coins via forks. Bitcoin Gold, Bitcoin Silver, Bitcoin Platinum, Bitcoin Diamond, Bitcoin Uranium, Bitcoin Cash Plus and Super Bitcoin all opportunistically announced that they would fork Bitcoin and airdrop coins to Bitcoin holders to capitalize on Bitcoin Cash’s success.

While it lost some ground in the beginning of the fall, Bitcoin Cash’s ability to (for the most part) maintain its value got traders reconsidering the fixed-pie notion about the bitcoin and cryptocurrency market. Investors began to see forks and alternative coins as potential value-added to an ecosystem in which there would be many winners. This wave of thinking positioned Bitcoin Cash perfectly as the pivotal date approached for locking in SegWit2x.

📈 November 1 to December 22: Consolidation as SegWit2x Gets Cancelled When the SegWit2x proposal was ultimately canceled, it marked a defeat for the big-block advocates working to change Bitcoin. Those advocates, naturally, moved to Bitcoin Cash — temporarily spiking the price. But the biggest spike of all came at the end of December, when BCH launched on SFOX/Coinbase and the price nearly tripled in response.

Market observers expected hot money to flow from Bitcoin to altcoins after the SegWit2x hard fork was cancelled. Instead, the entire altcoin market seems to have crashed along with Bitcoin, while Bitcoin Cash surges by 55% to reach $992.

On November 8, Segwit2x advocates cancelled their plans for the SegWit2x fork. Bitcoin Cash began rising on the news and it hit an all-time high of 0.4 BTC ($2,250) on November 12.

SegWit2x was a plan to update the Bitcoin network in two parts:

Without support inside of Bitcoin, bigger block advocates started to flock to Bitcoin Cash.

After that, the price held relatively stable at around $1,500, over 3x from early November. It declined in value relative to Bitcoin, down from the high of 0.4 BTC to 0.1 BTC, due to the increase in the price of BTC.

In late December, Bitcoin Cash had its biggest rally yet. After being listed on SFOX and Coinbase, the price more than doubled, briefly touching the $4,000 mark.

It was true of Bitcoin and it’s now been true of Litecoin and Bitcoin: when you make a cryptocurrency more accessible, and increase liquidity in the market, you drive the price up. As Ari Paul of BlockTower Capital describes:

On May 3rd, when Coinbase announced and enabled the trading of Litecoin, it rallied 32%. That’s after Litecoin had rallied more than 300% in the preceding two months. In the week following an announcement by Bithumb (the largest South Korean exchange) that it would begin trading Monero, that coin appreciated 145%.

Bitcoin Cash has been a more niche asset for most of its five months in existence. Now, we’re going to find out what happens when it’s in the mainstream — when it’s something anyone can trade.

The Future of the First Hard Fork

Today, Bitcoin Cash is solidly the third biggest cryptocurrency in the world, and a legitimate contender to take up the mantle as the digital currency to use for everyday payments. We’ve just seen what happens when you bring better liquidity and accessibility to an asset like that, and we’re excited to continue supporting this ecosystem as it grows.